FIRST VOYAGE AROUND THE WORLD

Sanlucar de Barrameda prepares with enthusiasm and excitement the commemoration of one of the most remarkable feats by man: the first circumnavigation of the World.

Throughout the XVI century the beaches and the harbour of our city were protagonists of constant departures and arrivals of naval and civil fleets that were going or returning from the New World.

The fact that the port of Seville was the only one authorized for the departure and arrival of ships for overseas travel allowed Sanlúcar to play a key role in such voyages.

The first reason for it was the geographical location, at the mouth of the Guadalquivir River, the umbilical cord that connected it with Seville.

The second reason was its belonging to the Dukes of Medina Sidonia, who as General Captains of the Sea Ocean and coast of Andalusia, were responsible for the preparation and dispatch of the fleet.

The 20th of September of 1519 a fleet of five vessels departed from the port of Sanlúcar on its way towards the Canary Islands. Under the command of Fernando of Magellan they started the first stage of the voyage that for the first time would carry out the first circumnavigation of the world, demonstrating in a practical way the spherical shape of the Earth.

The main goal of this expedition was to reach the Moluccas, islands that produced valuable spices, navigating towards the West to snatch the monopoly to the Portuguese that came from that destination from the East, hugging the coastline of the African continent with Cape of Good Hope and navigating through the Indian Ocean.

In this adventure they will discover the Strait that unites the Atlantic Ocean with the Pacific (name given by Magellan to the up to that point known as the Southern Sea).

There were five caravels in the fleet: the Trinidad, the San Antonio, the Concepción, the Victoria and the Santiago.

The expedition was put together by 265 people of different nationalities: Spanish, many of them Basques, Portuguese, Flemish, French, German, Greek and Italians.

The Adventure lasted 3 years, from 1519 until the return of the only surviving vessel, the Victoria. It entered the harbour of Sanlúcar the 6th of September of 1522, with only 18 crew members that were in terrible shape after such a long voyage. Among them, the journalist author of the first story about the circumnavigation around the world: Antonio Pigafetta.

We suggest a stroll through the main places of our city that remind and commemorate the extraordinary deeds of those men.

Below you can see two summary documents with the route that can be downloaded in PDF format, and later the itinerary with online information:

ROUTE FIRST VOYAGE ROUND THE WORLD IN SANLÚCAR ING A

ROUTE FIRST VOYAGE ROUND THE WORLD IN SANLÚCAR ING R 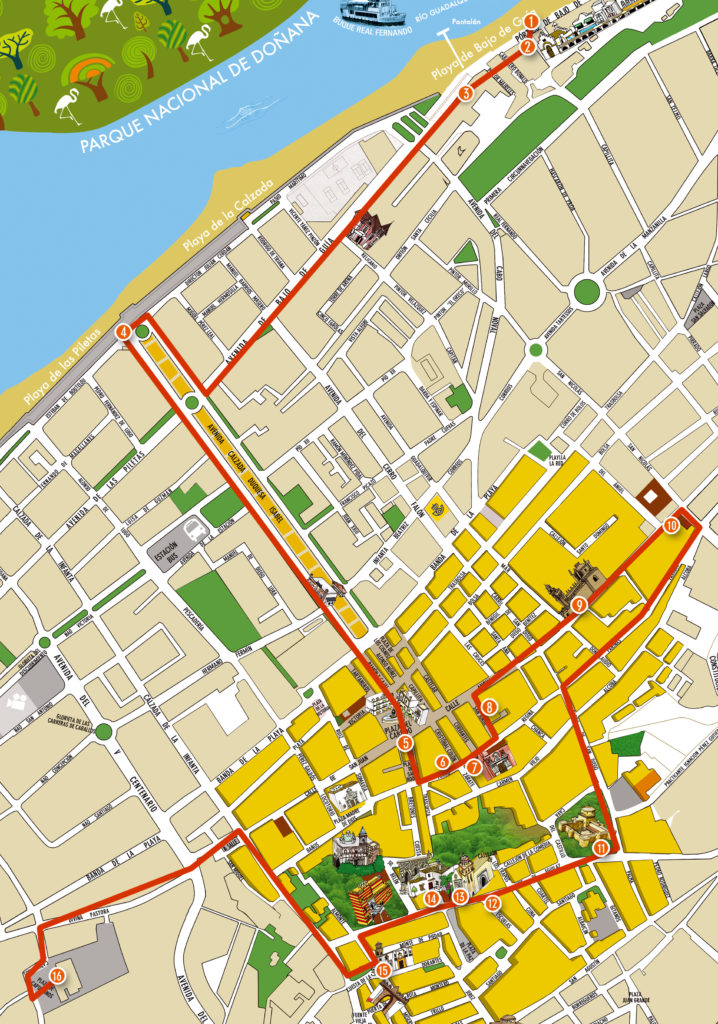 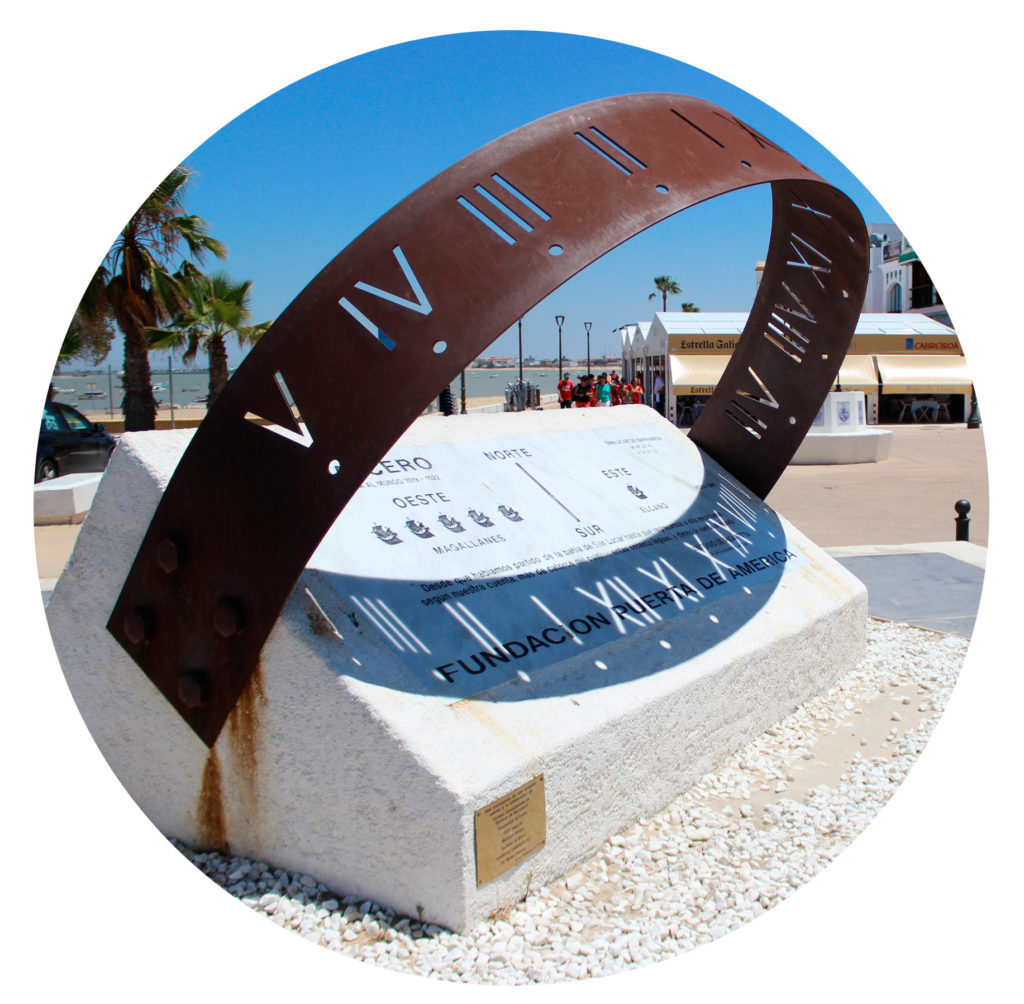 Monument that commemorates and indicates the starting point, the “Zero League” of the expedition that with Fernando of Magellan up front, that began the voyage around the World from Sanlúcar the 20th of September of 1519, returning the 6th of September of 1522, under the command of Juan Sebastian Elcano. The equinoctial band, forged in iron with the hours drilled in roman numerals, is held on white concrete.

On it an inscription with a quote from a text of Antonio Pigafetta, the journalist of the newspaper: “Since we had left the bay of San Lucar until we returned to it, according to our calculations, more than fourteen thousand four hundred and sixty leagues, and we navigated around the world.” 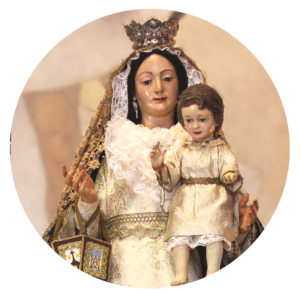 The chapel of Our Lady of Carmen Bajo de Guía is being preserved. It is an image from the XVI century, patroness and protector of men of sea. Her cult was taken by the citizens of Sanlúcar to America and the Philippines. The inner walls of the chapel are decorated with murals painted by the painter Francisco Maireles in 1983. 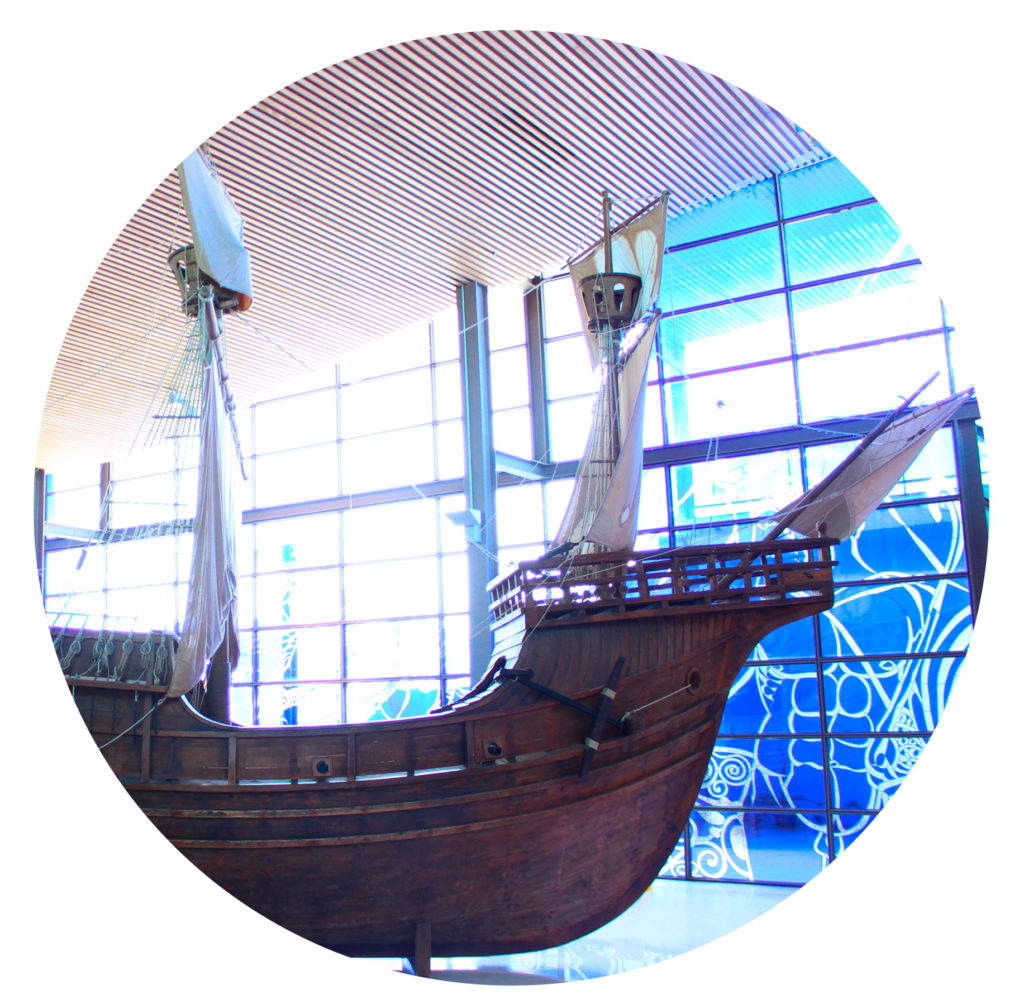 Located on the top floor of the old Ice Factory. Today it is the Doñana Visitor Center. It´s a 1:8 scale model of the original. At the pier of the exposition they represent barrels, pipes, bundles, and boxes where they carried water, food and goods for the voyage.

The name of the ship comes from the church of Santa Maria of the Victoria of Triana, where Magellan swore to serve King Charles I. Tradition has it that the ship was built in the shipyards of Zarautz (Basque Country).

The cargo on the boat were spices brought from the Moluccas, they covered much more than the cost of the entire expedition. 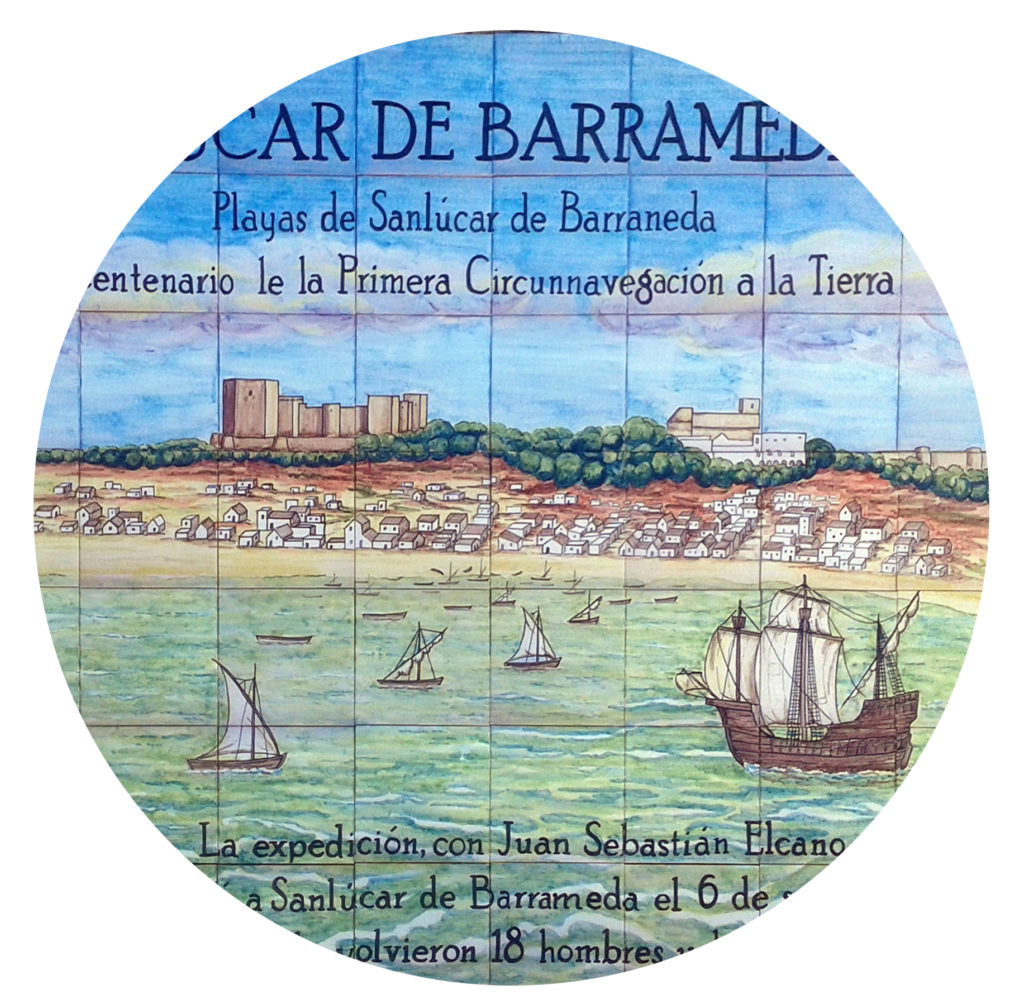 Two-faced ceramic wall by ‘Cerámica Verónica’, photocall type, commemorative of the First Circumnavegation of the Earth. The picture of the expedition composed of five ships, Trinidad, Concepción, Victoria, Santiago and San Antonio, leaving the bay of Sanlúcar with Ferdinand Magellan as commander of Malucas fleet and the picture of the return of the Victoria Ship captained by Juan Sebastián Elcano can be observed on the wall.

Visitors will be able to be photographed in front of the ceramic wall to capture the scenery of the coast which witnessed the protagonists of the First Circumnavigation of the Earth. 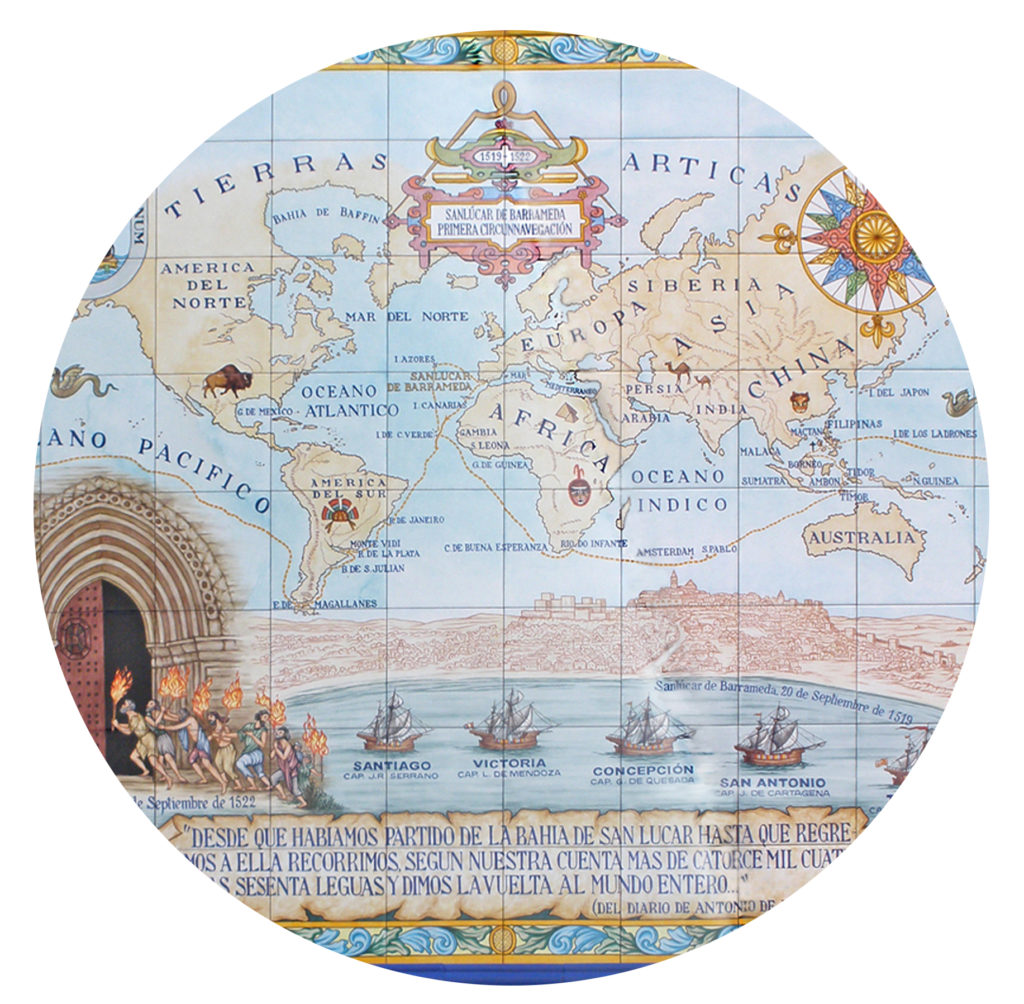 5. COMMEMORATIVE TILE OF THE FIRST VOYAGE AROUND THE WORLD

Peral Street.  Side of the Public Library Facade.

A- Middle section. 1956. Includes the names of the eighteen sailors aboard that made it back on the only surviving ship.

B- Right side panel. 2012. Portraits of Magellan and Elcano and image of the ship Victoria with the motto “Primus circundedisti me”, the first to go around me.

C- Left side panel. 2011. Itinerary travel map of the first circumnavigation. Scene of the sailors accessing the church of Our Lady of O and the names of the five ships that set out on this voyage. Author: Alfonso Saez.

D- Juan Sebastián Elcano writes the letter to the emperor Carlos I informing of his arrival in Sanlúcar. It realizes ceramic panel: Manuel Gallego. 2016. 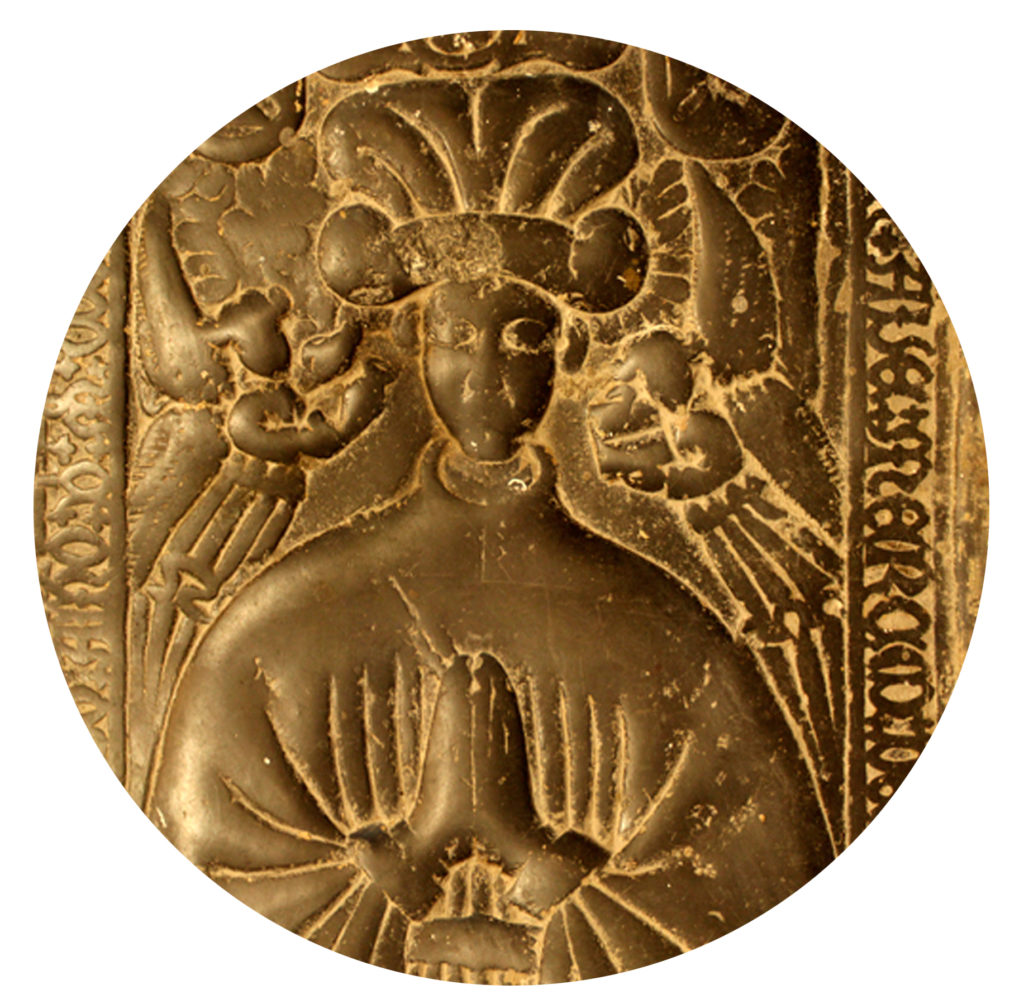 It´s the first temple built in the lower district of the city, on the sands of the seashore. Founded by Alonso Fernandez of Lugo in 1441 as a church and a hospital to welcome the sailors that came and went to the Canary Islands.

In the area surrounding the Presbytery there is a tombstone of the founder and on it, a magnificent wooden roof. A luxurious Mudejar coffered ceiling which would also be another of the artistic elements that would be exported from Sanlucar to Latin American countries.

As an example of the artistic exchange between both shores of the Atlantic Ocean, we can observe a painting of the Patroness of Mexico, the Virgin of Guadalupe. 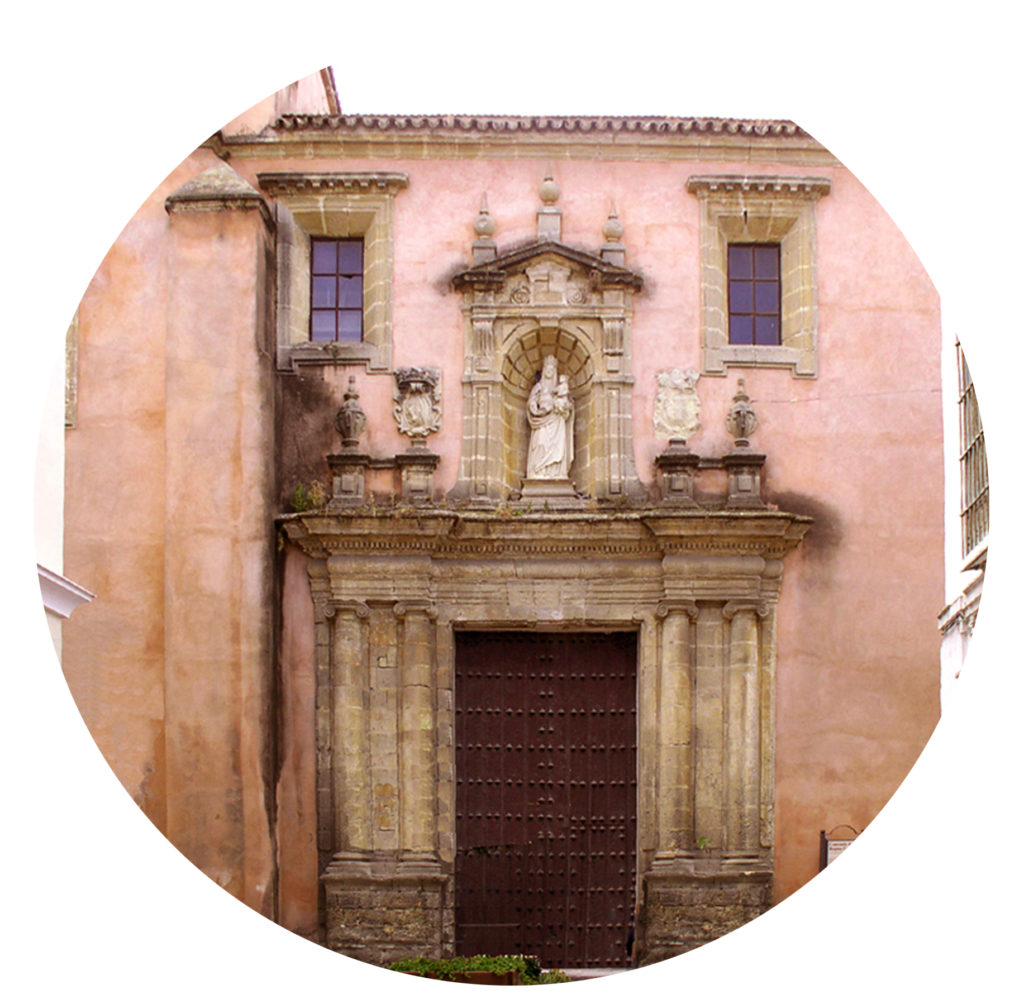 Founded in 1519, the same year as the departure of Magellan’s-Elcano´s expedition, by the devotee Garcia Diaz of Gibraleon. Facade with a double twin portal, paid for by the Dutchess of Medina Sidonia Lady Ana of Silva and Mendoza and fulfilled by the architect Alonso of Vandelvira in 1609. The shields of Lady Ana, that had been appointed patroness of the convent by the Franciscans of the Order of St. Clare in 1603, cover both the portals and the church windows. This convention-style architecture was a model for the feminine monasteries that were founded in Latin American countries. 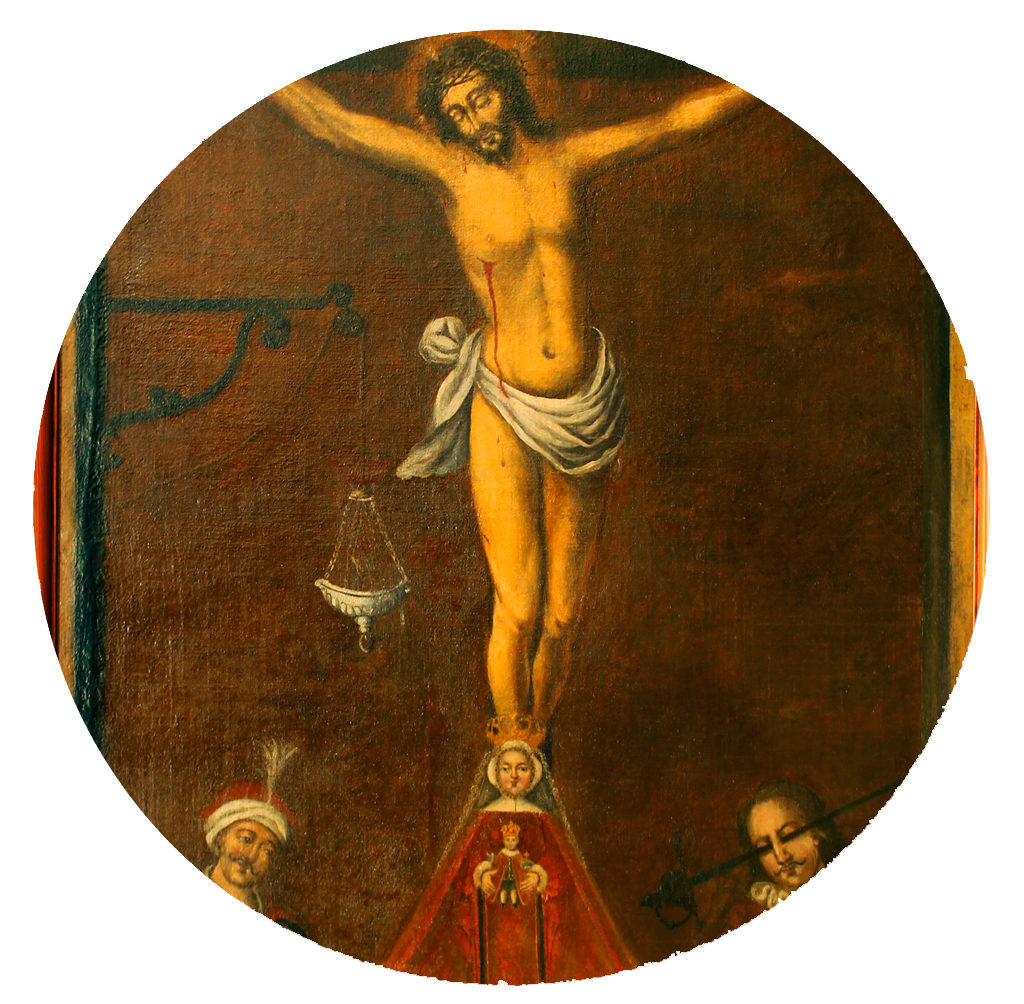 Year 1517, built on the land donated by the Dukes of Medina Sidonia to the English Catholics along with the dockyards. In it you come across the “Christ of the Boatmen”, of grand devotion amongst the seamen. A painting representing this Christ and the Virgin of Caridad, Patroness of the city; on both sides the VII Duke of Medina Sidonia, Sir Alonso Perez of Guzman and the second lieutenant Pedro Rivera Sarmiento. Workmanship from the XVII century. It refers to the miracle of the Virgin of Caridad giving back her devotee Pedro´s health back after being wounded in an argument where he interceded to stop two seamen that were arguing. This painting was recently rescued from the state it was in by the restorer from Sanlucar Maria Luisa Millan. 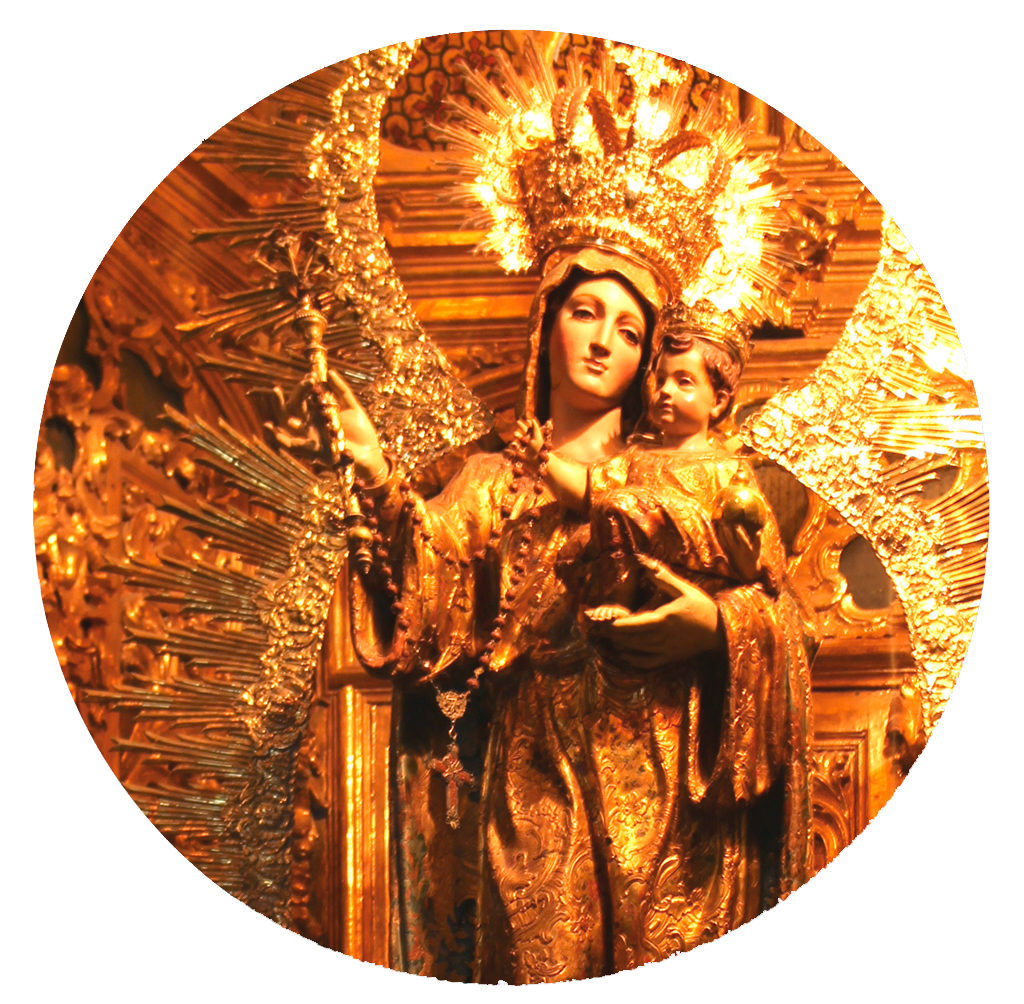 In the church of these Dominican frails we can see the image of Our Lady of Rosario, sculpture from the XVI century known as “The Galeona”, being carried in galleons through the Atlantic Ocean. Patroness of the sailors after the victory of Lepanto the 7th of October of 1571, on the wall of her chapel there are some naval scene paintings.

In this temple there is also a Latin American artwork, a painting that represents the “Virgin of Affection”, of the Cuzco school. Possibly sent by a person born in Sanlucar that migrated to Peru. Very flat painting that employed the brocateado technique or using gold sheeting for the garments. 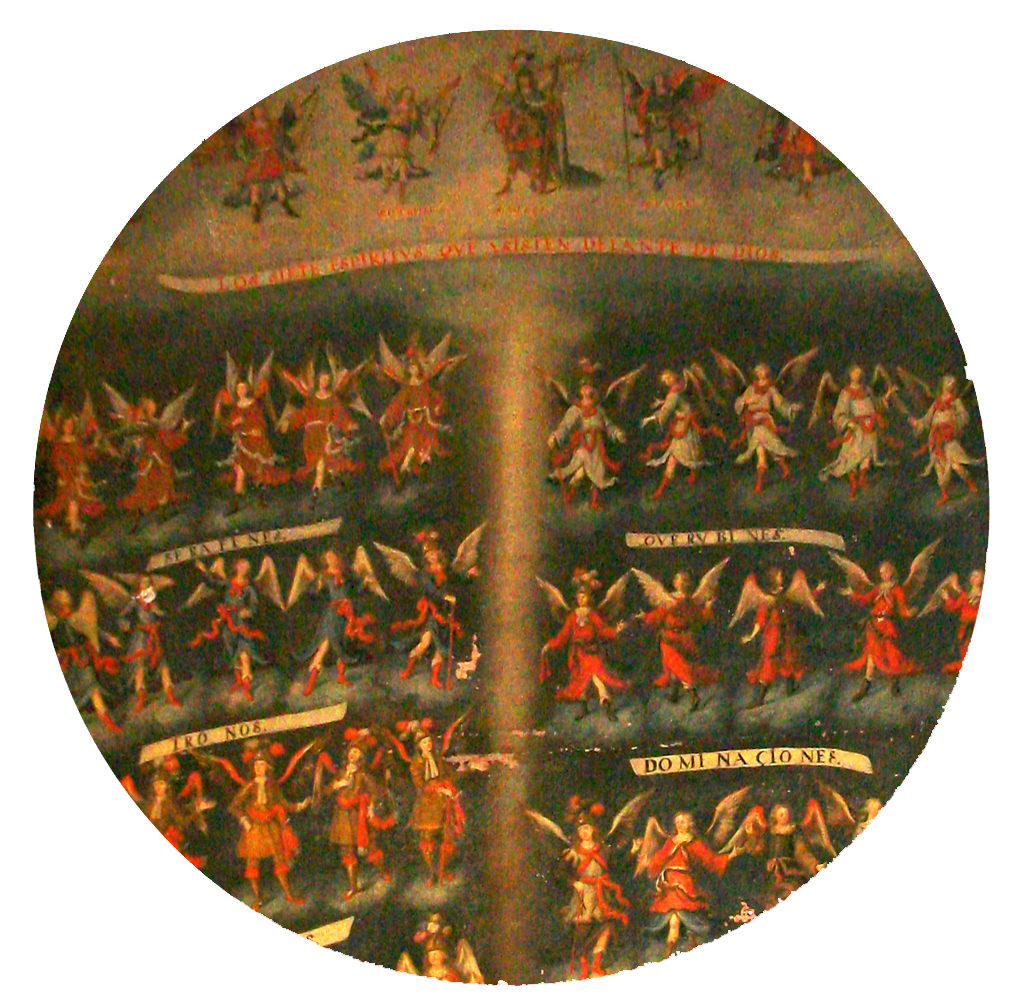 Temple located in the sailors old district. Inside you can see the painting “Ierarchia Angelorum”, from the XVII century. From the Puebla School, it shows the artistic and cultural relationship between Sanlucar and America. 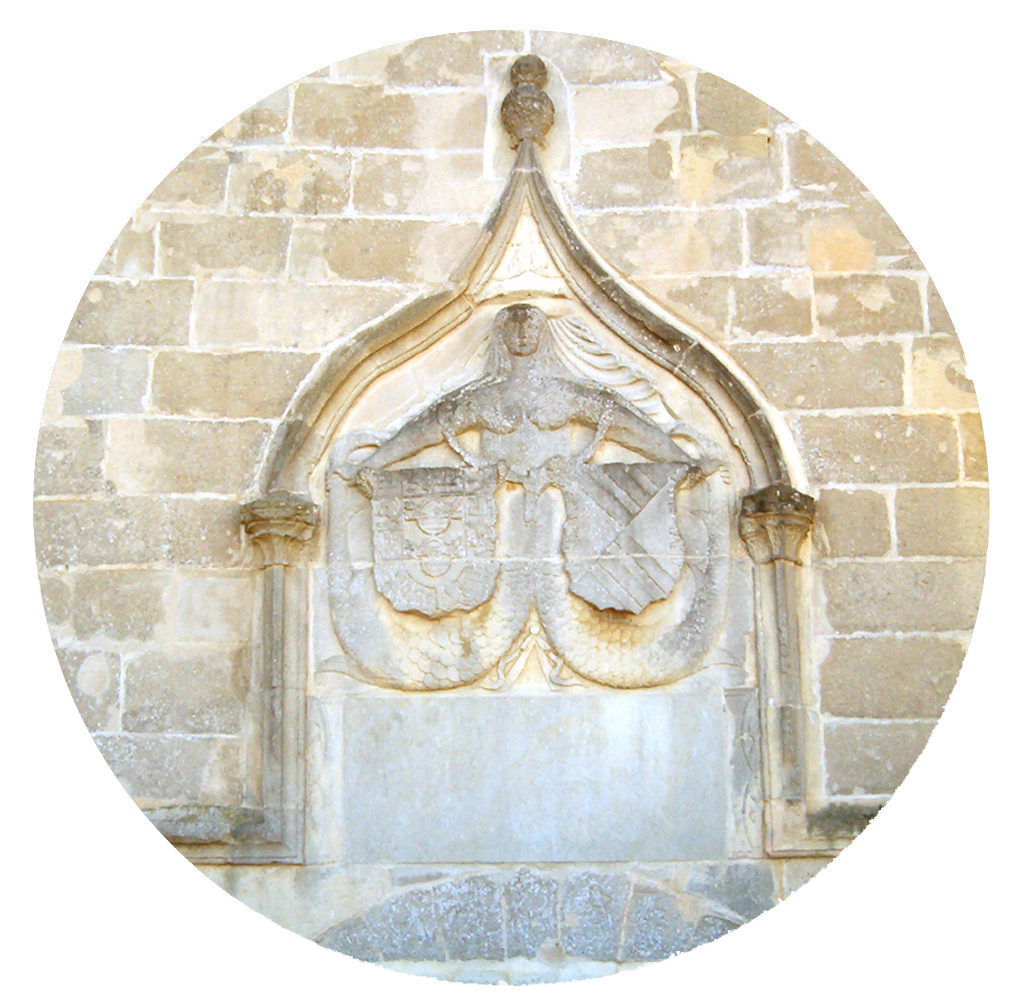 Fortress built in the XV century by the second Duke of Medina Sidonia. It was located at one of the corners of the wall of the city. It´s stunning appearance prevailed at the mouth of the Guadalquivir River.  The defence of the Guadalquivir riverbanks was crucial for a proper development of the trade business at the harbour of Sanlúcar as the vessels passed on their way towards Seville. 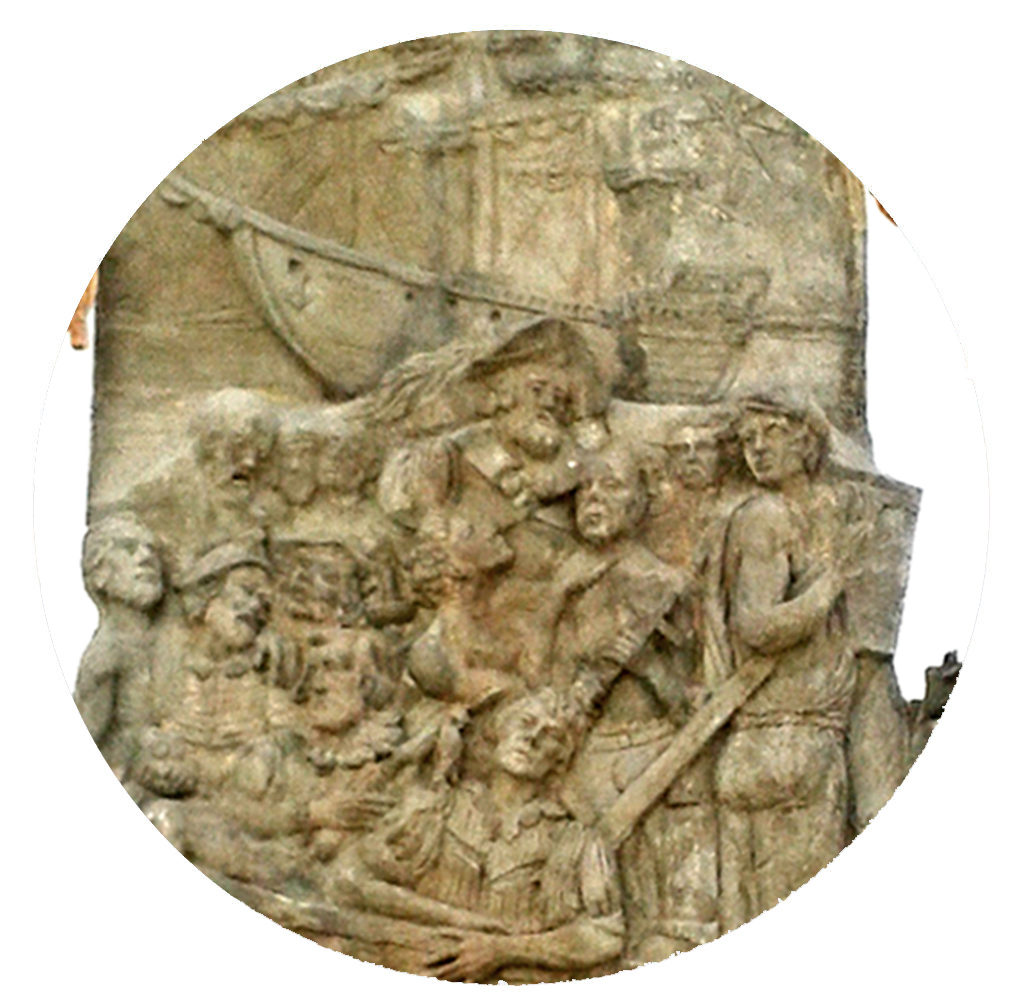 12. STONE ALTERPIECE OF THE FIRST VOYAGE AROUND THE WORLD

It represents Juan Sebastian Elcano with the seamen as they returned to Sanlúcar in 1522. In the upper part you can find a figure of Magellan. The author of the sculpture is Jesus Guerrero, from Sanlúcar, and was inaugurated the 6th of September of 2013. 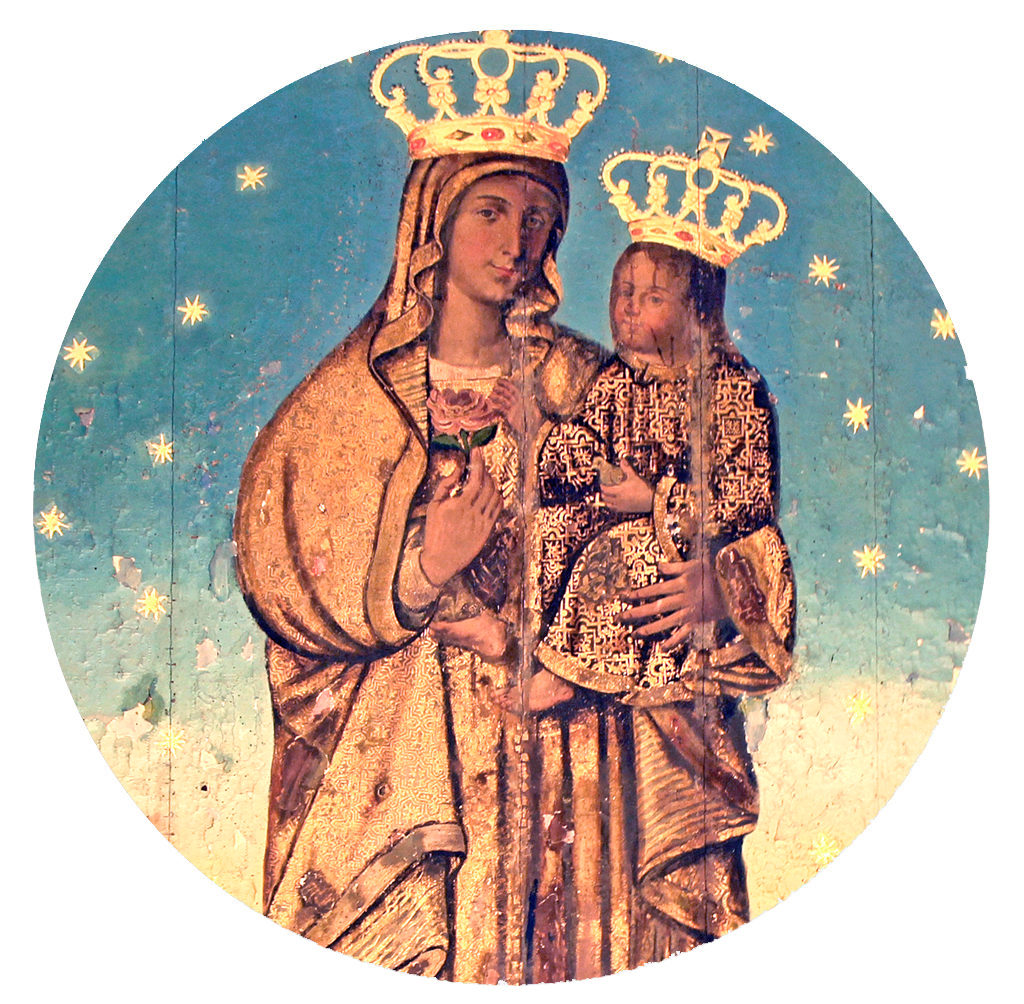 It was the temple to which the seamen went after getting ashore to thank that they had gotten back alive to Sanlúcar after their voyage around the world. In this Parish there is a chapel of the Virgin of the Antigua (of the Ancient), Patroness of Discovery. The seamen commended themselves to this Virgin as they embraced a trip to the New World. 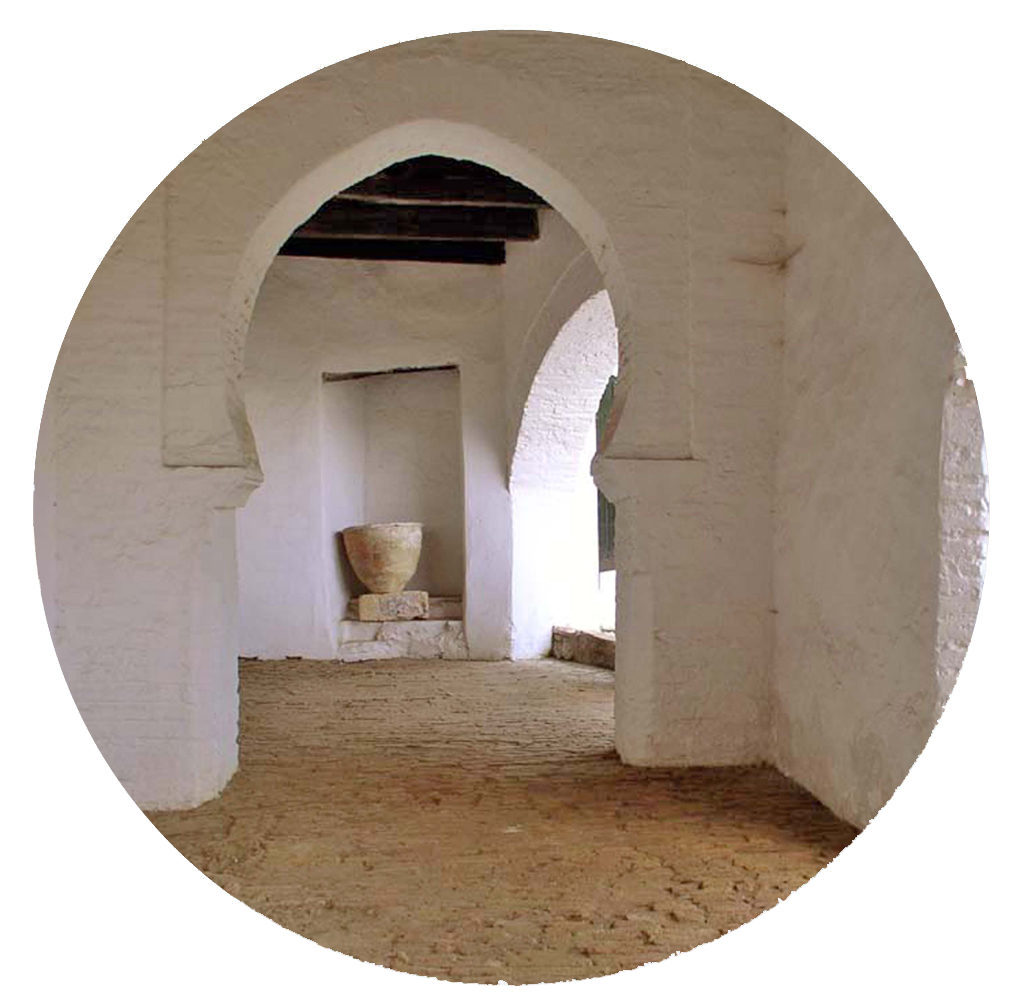 The Guzmanes, Lords of Sanlúcar and Dukes of Medina Sidonia controlled the harbour of the city from this palace that was built on the remains of an ancient Hispanic-muslim Alcazar from the XI century. The Dukes promoted the commercial trades at the harbour of Sanlúcar from which many scientific and commercial expeditions departed. 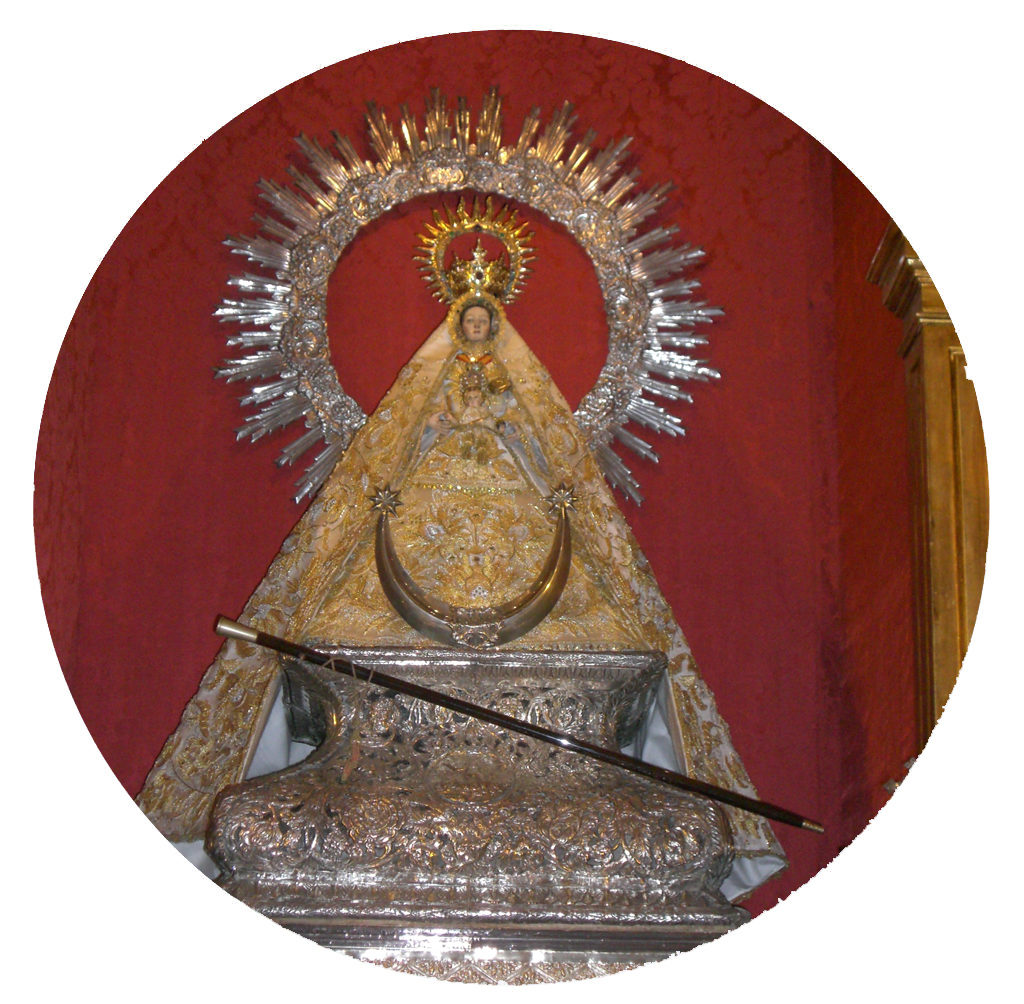 This temple, built at the beginning of the 17th century, is the seat of the Patroness of Sanlúcar, the Virgen de la Caridad, that was brought to Sanlúcar at the same period that the Basilica was constructed by second lieutenant Pedro Rivera Sarmiento, whom received a miraculous healing from the Virgen.

The image of the Virgen de la Caridad stayed in Sanlúcar, but her devotion extended through the Americas, demonstrating once again the significant cultural and religious relationship between Sanlúcar and the New World. 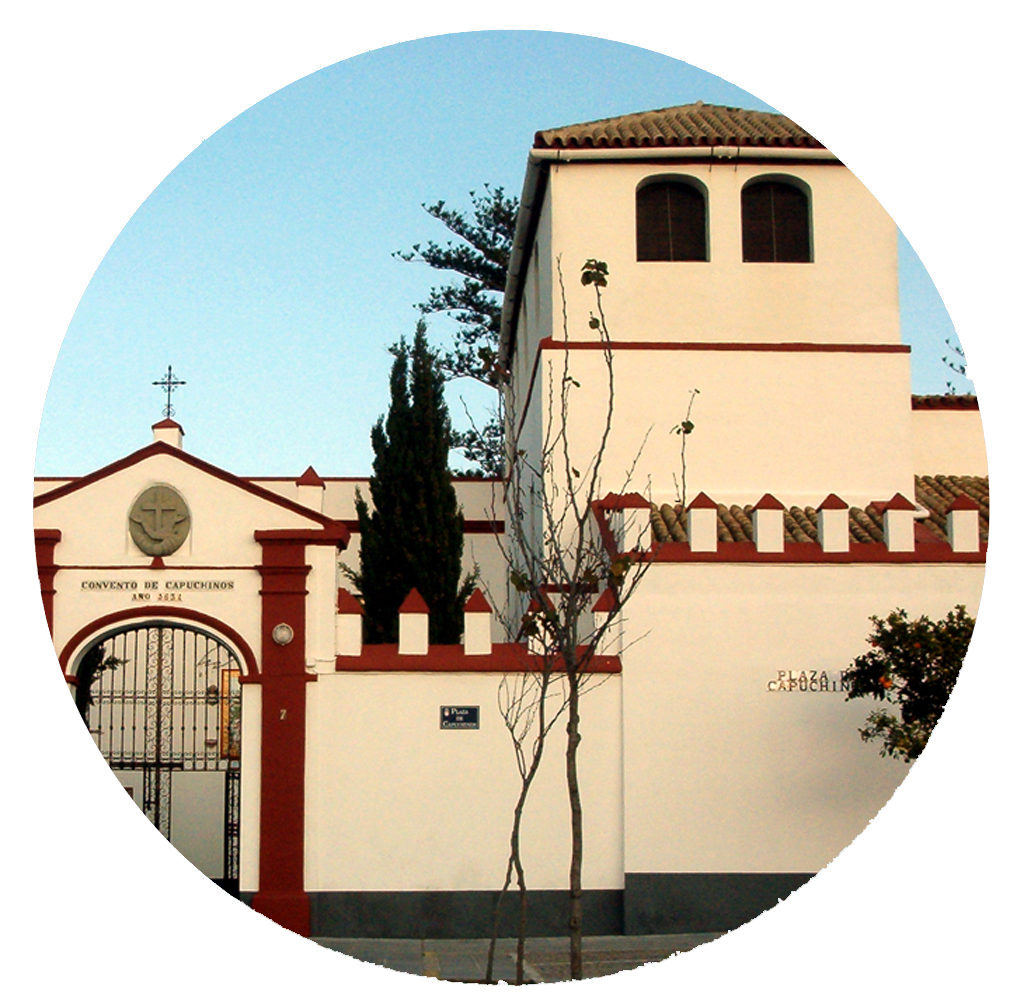 On the main altarpiece of its church you can see the Virgin of the Buen Viaje (Good Voyage) from the XVII century, Patroness of the old Brotherhood of Seaworkers, protector of the seamen that went to the American-Indias.

At the cloister there is a unique group of paintings that represent Saints of their Order, martyrs on the missions to America.

PRINTED VERSION IN PDF HERE: First voyage around the World