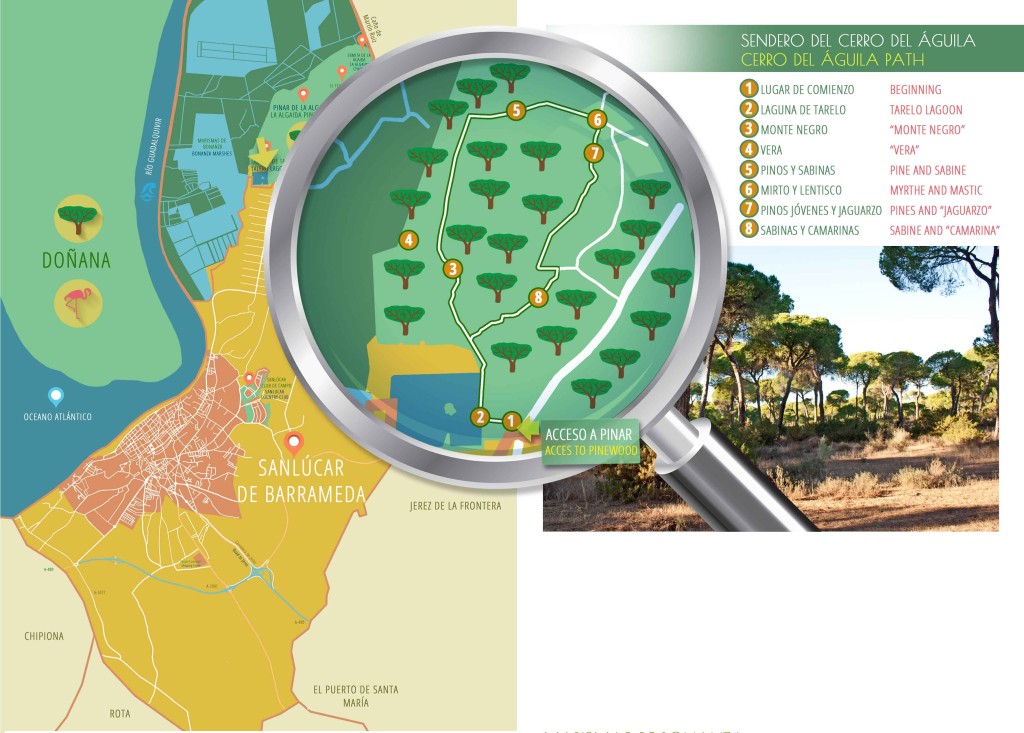 There are also various natural parks around Doñana. Within the Sanlúcar municipal boundaries is the Natural Park of Algaida with free access and a landscape very similar to the pine woods of Doñana.

The Natural Park of Algaida is a forest of stone pines (Pinus pinea) very similar to Doñana, and its extensión is of 691 hectares. Its formation is due to the silting of the Guadalquivir River estuary by the sands of the longshore current and sediment carried by the river.

Several excavations have been done in the pine forest, finding Roman remains with objects of worship. The archaeological remains are exhibited in the Museum of Cadiz.

Near the southern access the trail called “Cerro del Aguila” begins. The route is about 5 kms., without difficulty, and in a circular.

The pine forest of Algaida has recreational areas and a bike path with a main circuit of 4.5 kms. and a smaller one, less than 3 kms.

The landscape is of stone pine (Pinus pinea) and scrub formed by Mastic (Pistacia lentiscus), juniper (Juniperus phenicia), and herbs.

At one end of the pine forest there is a large eucalyptus (Eucalyptus camaldulensis) listed as the Singular Tree of Andalusia.

You can see many species of birds like vultures (Gyps fulvus), eagles (Aquila ssp.), Black stork (Ciconia nigra) or kites (Milvus spp.) It is also a habitat of he common chameleon (Chamaeleo chamaeleon).

Sanlúcar and the environment 1

Sanlúcar and the environment 2