Sanlúcar has been a bridging point where monumental and natural conditions merge fortifying them. This was already observed in 1806, when Godoy encouraged the Acclimatization Botanical Garden, instigating the scientific agriculture.

Up next we´ll describe two historical transcending gardens that you can find in our city:

The garden is a perfect combination with the exotic summer palace built in the 19th century. It was designed by the French gardener Lecolant, where he developed an English influenced romantic garden, style that was in vogue during that era and where he searched for a natural wild nature styled garden, combining different tree and plant species in a scenery where the landscape was formed by hills and slopes that offered numerous perspectives of the garden and the urban surrounding, due to the back gardens descending from the Higher District to the Low one.

The ducal gardens surround the palace and the slopes, distinguishing various areas that are perfectly balanced. The largest was designed at the beginning of the 16th century and seems like a elm tree forest that drops towards the Low District.

Another one surrounds the Arab Hall that has 12th century columns and a 16th century Baroque gallery, where they introduced paths surrounded by Box Trees and fruit trees.

Lastly, in the old stable, they have recreated a beautiful winter garden with flower beds and paths that now is used as part of the palaces coffee shop. 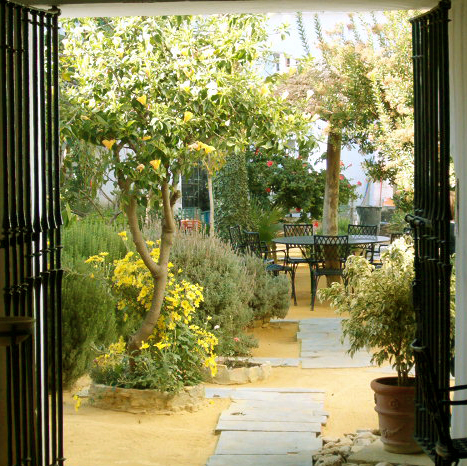